Tegenungan waterfall is a famous place to visit in Bali, yet it still quite hidden away from the hustle and bustle as it’s located just about 10 kilometers outside Ubud, next to Tegenungan village.

When you start to come closer you’ll see signs with a photo and text saying “Tegenungan waterfall” and a pointing arrow in the correct direction. Just follow these if you’re uncertain, but Google Maps will also work just as fine.

If you’re planning to go I’ve put together some info on how to get there and other things that can be good to know before visiting the Tegenungan waterfall. 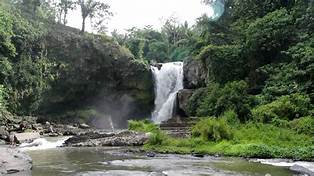 Upon arrival, you’ll see a ticket booth and a parking space. For cars, the price is 5.000 Indonesian Rupiah, and free for motorbikes. The staff will show you where to park if you get confused, so don’t worry about that.

After parking, you pay the entrance fee and receive your tickets, which is currently at 20.000 Indonesian Rupiah per person (1 January 2019).

After that, you will pass some souvenir shops as well as restaurants before you get to a big sign saying “Welcome to Tegenungan Waterfall” and from there you have a bit 5 minutes walk down about 100 stairs or so.

After you’ve been walking down a few steps you will be greeted by a viewpoint where you can see the waterfall from a distance. When you get halfway there will be a sign saying Waterfall to the left and temple to the right. It really doesn’t matter what path you choose as you can reach both places from both sides.

The stairs down are quite easy and walkable, so you don’t need any hiking shoes. Sandals are fine, but of course, if you aim to climb a bit off the beaten path to get unique views and photos, a good pair of shoes is always recommended. When you arrive at the Tegenungan Waterfall, you will see a changing booth to the left and waterfall straight ahead. If you want to go upstairs to the cliff, you’ll have to pass the wooden bridge.

If you want to avoid crowds like we did, I suggest that you as early as possible since the Tegenungan Waterfall is a popular tourist attraction in Bali, especially for those who stay in Ubud, as it’s the closest waterfall to Ubud, just 20 minutes by motorbike.

We arrived at 6:20 am, and we were the first there I suppose since we didn’t see anybody else there. We had the place all to ourselves for about 20 minutes before we saw the first tourists arrive.

Because we like to take several photos and try different angles it takes some time before we’re done photographing, so it was a pleasant surprise that we got the Tegenungan waterfall to ourselves that long!

I would avoid going there later than 12 if you don’t go later at sunrise, but I really suggest to go early and combine it with some other waterfalls near Ubud.

HOW TO GET THERE

Here below are driving directions and more info on how to get to Tegenungan waterfall from Ubud, Seminyak/Kuta, and Canggu. The best way to get there is probably by renting your own motorbike or hire a driver.

A taxi will be quite expensive and you would have to pay a fee to the driver for waiting as well. It’s fairly easy to drive a scooter in Bali, so if you have some experience it shouldn’t be a problem. But again, if you’re not comfortable with driving a motorbike, just grab a taxi or hire a private driver for the day and explore some other places nearby as well, such as the waterfalls of Kanto Lampo and Dusun Kuning.

How to get to Tenenungan waterfall from Ubud

If you’re staying in Ubud it’s very easy to get here early, and it’s just a 15-30 minutes ride from central Ubud. The road has good conditions and if you go early at sunrise the traffic won’t be as bad either. 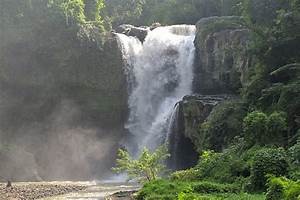 From Seminyak and Kuta area you have approximately a 1-hour drive to the waterfall.

The road is easy to follow and as soon as you come closer you will also see signs with a photo of Tegenungan waterfall and a pointing arrow.

Here below is the directions on Google Maps.

How to get to Tenenungan waterfall from Canggu

From Central Canggu you have about 1 hours of driving, maybe a little more if you ride a scooter. But just as the road from Kuta/Seminyak it’s easy to follow the directions and finding the Tegenungan waterfall from Canggu as well.

Go early if you want to avoid getting caught in traffic and having to share the waterfall with others. 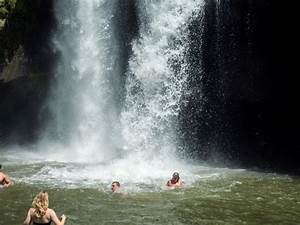 Directions from Canggu to Tegenungan Waterfall.

One of the more accessible waterfalls in Bali and one of the few that isn’t located in a mountainous area or in the northern area. Here are some of the most common questions about Tegenungan Waterfall in Bali. If your question isn’t answered below, feel free to leave a comment with your question and I will try to answer it for you.

How much is the Entrance fee?

How much does it cost for parking?

5.000 Indonesia Rupiah for cars, and free for motorbikes. This price is subject to change. Is it safe to swim in Tegenungan Waterfall?

If you’re a good swimmer you should be fine, but the waterfall is quite powerful and there are again signs and even red buoys in the water.

You can walk into the water a short distance before it gets deeper. So if you want to take a picture of you standing in the water in front of the Tegenungan Waterfall, that’s doable and safe.

Do you need to walk down the stairs to see the waterfall?

Well, you could just walk a few steps and see it from a distance and take a photo. But you will still have to pay the entrance fee. And to be honest, it’s not that hard to walk down and its much more amazing to see close-up. Can you jump from the cliff?

I wouldn’t recommend this. The water is not deep enough from that height and you will most likely injure yourself. There are several signs saying that you shouldn’t jump from the cliff, and Indonesia is not well-known for advertising danger and put up signs everywhere.

So, I would urge you to take this seriously as it really is dangerous.

Do you need hiking experience?

Well, not really. Just about any person with an average health should be able to climb down and up the stairs. If you want to visit the temple or second level of the Tegenungan waterfall, you won’t need any hiking experience either. Is the Tegenungan Waterfall handicap accessible?

Unfortunately not. The only way down is by the stairs, and currently, there is no elevator or ramp available.

Are there any restaurants?

Yes, there are some restaurants where you can buy drinks and food. A bit overpriced, but nothing too much.

Is there a changing room?

Yes to the left when you arrive at the Tegenungan Waterfall, you will see a small changing room.