Learn how to make woodcarvings from scratch and take your own creation home as a keepsake. Whatsapp +6285943421992

Mas village more precisely is located in the southern part of Ubud, about 5 km from Ubud Center and approximately 20 km from Denpasar airport Bali. Surrounded by several art villages around it, such as Celuk Sukawati village which is famous for its silver and gold handicrafts, Tohpati village with batik crafts, Batu village with dance performances and Ubud itself with painting art.

Ubud woodcarving became famous because of the very long history of the Mas village Ubud. Mas village was at its peak in the era of the 1970s to 1990s with a classic Balinese art style that made Mas village famous abroad. The origins of Mas Village’s fame as a great sculptor inseparable from the master of sculpture Ida Putu Taman. He popularized the culture of sculptural art among the villagers of Mas in the 1920s. Sculpting is no longer seen as exclusive but also as something that comes from the heart.

From there the art of sculpture was seen as a form of faith and gratitude to God. so it’s no wonder that some of the statues from the Mas village which also function as prayer tools in Bali inspired by wayang stories of Ramayana, Mahabarata and daily life.

The origin of the village originates from the story of a brahmin from the Majapahit kingdom named Dang Hyang Nirartha. He was invited to move to Bali by several members of the Majapahit royal family, after successfully subduing the kingdoms of the Balinese region. They decided to stay in Bali because the condition of Majapahit was in decline and threatened to collapse on the island of Java.

Danghyang Nirartha then decided to move, in Bali he was greeted by Raden Mas Willis, one of the royal officials. In the process they then have a relationship as teacher and student, especially in social and cultural matters.

Until one day, Danghyang Nirartha was married by Raden Mas Willis to his daughter. After that, their descendants were referred to as Brahmin Mas. Currently living in Mas village.

Raden Mas Willis was then crowned Prince Manik Mas. The leader in that area. From there the village is known as Mas village.

Sculpture in Mas village is inseparable from the figure of a Brahmin danghyang Nirartra. He planted a ” Tangi ” tree in the Taman Pule temple area. The priest said that one day the mas village would prosper from wooden crafts.

Then it continued that the artists from this village were highly trusted in making divine symbols, masks and wood carvings. Which was originally offered only to the kings in Bali. Until now, the skill of making wooden sculptures is growing rapidly in Mas Village.

Along with the times and the development of the tourism sector. So wood crafts in this village began to be commercialized or traded. Until now, there are thousands of wood sculpture makers, and there are also hundreds of artshop galleries to sell works of art. The maestros of sculpture from the Mas village

was born (1873-1953) in Mas Village from the Brahmana dynasty, very talented in the art of wood carving. His sculptural art was then continued by Ida Bagus Sadra, the only son of the Maestro. He was born in the village of Batanancak in 1925 and died in 1975. Being a sculptor (Wood Carver) has been inherited from his father. Together with his wife Dayu Rupi, he built the ADIL Art Shop in 1958. He was very successful in the 1970s because he had regular customers from big travel agents in Bali.

is a woodcarving craftsman who was born in the village of Mas, Ubud, Gianyar, Bali. He was born on December 13, 1936 and died November 20, 1993 aged (57). With his observations and using the equipment owned by his father, He was able to develop the creativity of sculpture. Worked until he was able to recruit 100 sculptors. Gus Tilem was a successful person in his works. His works have big ideas and visual power that captivate the world. Chosen to represent Indonesia at the 1964 New York World’s Fair, he held various exhibitions abroad, such as Thailand, Hong Kong, Australia, Germany, Austria and Mexico. The implications of his trip above have made Mas Village as a Wood Carving Center increasingly known to the world and visited by foreign and domestic tourists.

was born (1902-1965) into a family of artists. Not much media writes about President Soekarno’s close friend. Many works are collected by the Proclaimer of Independence of the Republic of Indonesia. The Tropen Museum in the Netherlands also collects his sculptures. The Krisna statue by Ketut Rodja was once used as master art by President Soekarno, shown to Indian Prime Minister Jahwal Nehru and Indira Gandhi at a state meeting. KP Rodja is known as an art deco pioneer in Bali. Founder of the first Art Gallery in Bali in 1955 which is still standing today in Mas Village.

Ubud Art Village Tour is Ubud Artistry Tour by visiting the most famous  village in Ubud for The Art . This tour will begin with the hotel pickup at 9:00 a.m.

The place that you will be visited during the trip such as Celuk village for gold and silver smith, Mas village for the wood carving , Batuan village which is famous for Balinese style painting art and Batubulan village for hand made Balinese Batik. Firts we will visit Batubulan Village to see the processing of Batik painting. Batuan village is the center of Balinese hand weaving and hand made Batik process. The Batik of Bali provides another venue of showing the artistic excellence of the Balinese people. Originally stimulated by Javanese motifs and dominated by wayang and other mythological characters. Contemporary batik artists have also experienced artistic development that parallels that of paintings. 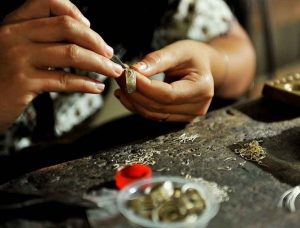 Bali Celuk Village is a traditional village located near to Ubud in the Gianyar Regency . Here where you can appreciate the mountain culture which in many ways is similar to that of the traditional areas of Ubud and the other surrounding villages except for one major factor. So Celuk Village is famous for the incredible gold and silver handicrafts which are available around this area. Mas village Bali wood carvings / Balinese carvers were for centuries under influence and lead by traditional belief myths and Hindu religion. Since 1920-1930, wood carving was develop quickly in new styles / themes – by influenced by Rudolf Bonnet and Walter Spies. Two men from the West opened the mind and inspiration of Balinese art to include more freedom expression.

Bali Batuan Village a famous Balinese Artwork / Balinese paintings and as such a famous Bali tourism destinations, located about 7 kilometers north of Denpasar about and 10 kilometers south of Ubud, it is popular with center of Bali arts, and now it’s known for its dancing, wood panel carving and Bali paintings ubud. We have lots of tours to Batuan and Ubud painters – where you’ll see the beautiful paintings and they have Bali paintings for sale too.